From the day we first opened our doors in 1952, First National Bank of South Miami (FNBSM) has been championing the needs of our community, local businesses, and individuals by helping them successfully grow, prosper and compete. Today, FNBSM has evolved into a leading business bank with 4 branch offices supporting the vital community we serve.
We have provided millions in loans, helping our customers achieve their financial and personal goals. Those loans have helped to fuel the local economy and contribute to the welfare of our community. FNBSM plays a crucial role in the community we serve by extending credit and offering community development lending designed to meet the unique needs of all of our community members, including those in low- and moderate-income areas.
We work side-by-side with our customers, neighbors and friends. Every FNBSM banker embraces the philosophy of building a prosperous community by giving back to a wide range of non-profit endeavors. Our valued employees donate their time and expertise, often in leadership roles, to charitable and civic organizations throughout our service area.
Our ongoing commitment is to champion the needs of local businesses and individuals in Miami-Dade County, including those in low-and moderate-income areas, by helping them to successfully grow and prosper

Our staff at First National Bank of South Miami volunteer their time, skills, knowledge and enthusiasm to promote the quality of life in our community. Our staff leadership is reflected in the community to: identify, analyze, collaborate, and solve pressing societal needs and issues through the efforts of broadly engaged citizen organizations.

Step up for students

Step Up for Students is a 5013 nonprofit in Florida providing low income students and students with special needs with scholarships to help pay tuition for private school, assistance to attend an out of district public school, or for tutoring, textbooks or therapies.

We believe good financial practices start early. In 1987, with a charter from the Office of the Controller of the Currency, we opened a teaching bank called Twiglet at David Fairchild Elementary School to educate children on the importance of saving money and managing it responsibly. Twiglet also teaches students how banks operate. Housed in a renovated caboose donated to the school by a railroad company, it is operated and completely staffed by children and open for business only to them.

In April of 2011, we opened our newest branch at East Ridge Retirement Village. Our bank provides on-site financial services for the residents of this community, including an ATM and a full range of bank programs and resources. First National Bank of South Miami has become an important part of this community.

Six of the bank’s officers are actively engaged in Chamber South, the chamber of commerce representing the greater South Dade area for more than 75 years. Our executive vice president was the chair for 2009-2010 and still serves on both the board and executive committee. We are also active in several committees including: small business, government affairs, ambassadors, and Chamber Next. The bank sponsors Chamber South events annually. Our bank has enjoyed a great relationship with Chamber South for decades.

The bank has supported the South Miami Art Festival since its inception, and has been the presenting sponsor since 2007.

We spearheaded the renaissance of the Red Sunset Merchants Association. RSMA is a group of merchants in the general business area of South Miami (Sunset Drive and Red Road). Since the association’s founding in the mid 1970s, its focus has been to market area businesses, act as a liaison for businesses to City Hall, and provide networking opportunities and general support to its members. First National Bank of South Miami has been a member since its inception, and many of our officers have served as board members throughout the years. Two RSMA board members are bank officers who have served as such for several years.

The SMHA is a group of business leaders who work for the good of South Miami Hospital. The premier purpose of SMHA is to act as goodwill ambassadors for the hospital. SMHA members attend monthly meetings on timely topics and speak about the same throughout the community. Since 1960, the associates also work to plan the Mercury Ball each year. The Mercury Ball is the highest-dollar fundraiser for the hospital each year. The bank has sponsored the ball for many years. Two bank officers currently serve on the board and have done so for more than a decade.

For almost 30 years, the bank has sponsored the one and only Santa float in the parade. Each year we include many children who dress as elves to accompany him. The official Santa is played by a bank officer.

The City of South Miami, together with Prince Media Development, has joined forces to organize the South Miami Manatee Tour. Fashioned after the Chicago Cows on Parade, the Cincinnati Pig Gig, the Flamingos in the Gables, and the Coconut Grove Peacocks, this is a unique interactive free public art exhibit and the first of its kind in our city. First National Bank of South Miami was proud to step up and be the premiere and presenting sponsor of this wonderful event.

First National Bank of South Miami has been recognized as Employer of the Year by Goodwill Industries and presented with a recognition award for the bank’s continued support and commitment to Goodwill and their efforts in the community. Goodwill Industries is a non-profit organization dedicated to training, employing and placing people with disabilities and special needs in community jobs in order to transition to independence. The award represents the bank’s leadership as an exemplary employer and corporate citizen.

The South Miami Alliance for Youth

The South Miami Alliance for Youth is a not-for-profit organization that supports and provides funding to the youth in the City of South Miami. Funds provide social, educational, and economic opportunities. The alliance was organized by a group of concerned South Miami citizens in 1995 and was granted 501(c)3 non-profit status in 1996. Thanks to the generosity of our staff members, we have been able to donate more than 200 gifts during the holiday season for the past five years to those less fortunate.

Fellowship House was founded in 1973 through a community support program grant awarded to the Mental Health Association of Dade County. First National Bank of South Miami encourages and sponsors savings accounts, at no charge and with no minimums, for all Fellowship House members to assist them in gaining financial knowledge. Fellowship House offers vocational, social, employment, case management, outpatient services, and residential programs and is accredited in behavioral health for psychosocial rehabilitation programs in the areas of case management, community-based rehabilitation, community housing, outpatient treatment, and community employment services. The bank’s past president, Curtiss Sibley, served on Fellowship House’s board for more than 20 years. Our executive vice president, Veronica Birch Flores, served on the board for three years and currently serves on the advisory board. 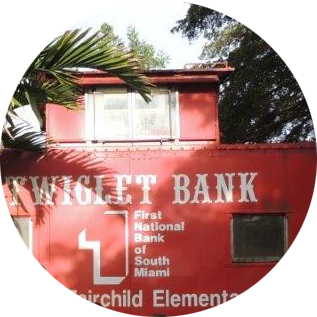